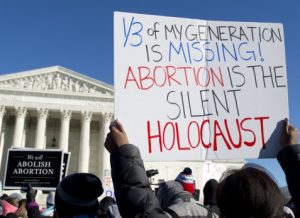 How do we stay motivated to work harder and more diligently on behalf of the unborn? To gain inspiration, I look at history.

I am a World War II history buff. I enjoy reading and learning about the Greatest Generation, the war, and the efforts of those who helped others during those years.

There are three people who have inspired me.

Oskar Schindler was a German industrialist who was credited with saving 1,200 Jews by employing them in Poland. Toward the end of the war, factories were moved to Sudentland — areas of the former Czechoslovakia that were primarily inhabited by Germans — thus sparing all of those Jews. Oskar bribed military officials to prevent the execution of those working. He spent his entire fortune on bribes and on black market supplies for his Jewish workers.

Corey TenBoom was a young Dutch girl who worked tirelessly for the Dutch Resistance. Her family owned a watch store, and they built a secret room and installed a buzzer to warn the refugees and members of the resistance that they were hiding to be quiet and to hide as quickly as possible when the police were spotted. It was believed that at any time they would be hiding four Jews and two or three members of the resistance, all while appearing as though life was just routine at the watch shop. She was credited with saving over 300 people.

Irena Sendler was a young Polish social worker who was dedicated to helping the Jews in German-occupied Poland. Her work was extremely risky because giving any assistance to Jews was punishable by death, not just for the person helping, but for their entire family. Poland was the only country in German-occupied Europe where the death penalty was applied. Irena saved 2,500 Jewish children by smuggling them out of the Warsaw Jewish Ghetto and then organizing a large operation that provided them with false identity documents and shelter. Toward the end of the war she was arrested, brutally beaten, and tortured, but she refused to release any information on the children who were hidden. She was credited with saving more Jews than any other individual during the war.  She declared, “Every child saved with my help is the justification of my existence on this Earth and not a title to glory.”

So where do these stories lead us? Do they inspire us? Worry us? Make us think?

I read these stories and am in awe of their courage, faith, and determination. I find myself asking the question … ”If I had lived in German-occupied Europe during the war, what would I have done?”

Well, here we are today. The War on Life has been going on since 1972. Millions upon millions of lives have been lost to abortion. Am I willing to fight on behalf of the unborn?

Would I be willing to give my entire life savings to the cause of the unborn … like Oskar Schindler did to save the Jews?

Would I be willing to provide a safe space for an unwed mom … like Corey TenBoom provided a safe hiding place for Jewish people and members of the resistance?

Would I be willing to be fight for each individual life, even if I were tortured and brutally beaten … like Irena Sendler was?

I hope my answer would be YES to all of the above, but it is hard to fight. It takes determination and courage and faith.