Prolife people are invited to the Annual Conference sponsored by Right to Life of Michigan.

Be a part of this inspiring day filled with information, workshops, and strategy sessions to promote a culture of life.

2021 members and students are eligible for a discounted price if registered through Grand Rapids Right to Life by August 31.

Dan was born through the hands of one of the deadliest abortionists in American history. Despite receiving the gift of life and loving parents through adoption, he rejected his family values as a teenager and walked a path that led to alcoholism, drug abuse, and unplanned pregnancy. While still contemplating the abortion of his first child, Dan experienced a powerful transformation that radically changed his life.

Since the tragic Roe v. Wade and Doe v. Bolton Supreme Court decisions in January of 1973, legalized abortion-on-demand has killed more than 60,000,000 unborn children in the United States.

Grand Rapids Right to Life supports the efforts of Life Chain, a peaceful and prayerful public witness of prolife individuals standing for 90 minutes praying for our nation and for an end to abortion.

This visual statement of solidarity by the Christian community attests to the fact that abortion kills children and that the sanctity of human life must be protected from the moment of conception until natural death.

Join with hundreds of people in Grand Rapids, and tens of thousands of people nationwide, for a time of collective prayer to end abortion in our nation.

Signs for Life Chain may be picked up on Sunday, October 3, at:

National ProLife T-shirt Day is not just for students; it’s for anyone who believes that all life, born and unborn, should be protected. It is a day when prolife people can do something in unity to help spread the message of life.

To encourage participation, all Grand Rapids Right to Life T-shirts are $2 off during the month of October. Check out the different colors, messages, cuts, and material in the online store.

To celebrate National Prolife T-shirt Day, people of all ages are encouraged to wear their convictions about the sanctity of life.

Everyone can wear some cool prolife gear, promote their prolife values, and possibly change some hearts and minds. This event was designed to help even the most timid feel empowered to speak up on behalf of the innocent and defend the weak.

During the month of October, save $2 and purchase a new prolife T-shirt to celebrate the precious gift of human life in style. 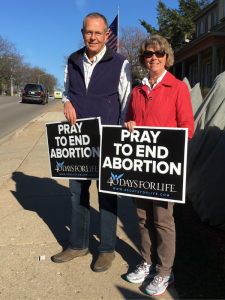 As part of the fall campaign for 40 Days for Life, Grand Rapids Right to Life has adopted a day at the peaceful vigil.

Join with us and pray to end abortion in front of the only free-standing surgical abortion facility in Grand Rapids.

40 Days for Life is a grassroots campaign to end abortion through prayer, fasting, community outreach, and by holding a peaceful prayer vigil in front of an abortion facility.

Grand Rapids Right to Life supporters will pray for 12 hours on Thursday, October 7.  Participants are asked to remain on the public sidewalk in front of the abortion facility and pray for one hour.

Want to know what happens inside this free-standing abortion facility?*

For $600, Heritage Clinic for Women offers medical abortions (RU-486) for pregnancies between 4 – 10 weeks.  RU-486 is a combination of two drugs used to kill and expel a child from the womb.

Suction Curettage abortions are used for pregnancies between 5 – 13 weeks.  In this procedure, the cervix is dilated and the abortionist uses a powerful suction tube to dismember the unborn child and suck her out of the womb.

Dilation and Evacuation (D&E) abortions are used for pregnancies between 14 – 22 weeks.  In this procedure, the cervix is dilated and the abortionist uses forceps to dismember different parts of the child, such as arms and legs.  The baby’s head is often too large to be removed from the womb, so the abortionist must crush the skull in order to remove it.

*Information related to Heritage Clinic for Women pricing and procedures was taken directly from their website before they removed their fee schedule.

The 34th annual Focus on Life Benefit Dinner will be the largest prolife banquet in Michigan, will incorporate 25 student volunteers, and will feature Gov. Mike Huckabee, Fox News contributor and TV host, as the keynote speaker.

Huckabee was the 44th Governor of Arkansas from 1996 until 2007. He left a legacy of tax cuts, job creation, the reconstruction of his state’s road system, K-16 education reform, and a nationally heralded and duplicated health initiative that focused on prevention.

As a staunch defender of the right to life, Huckabee has stated:

“It’s time that we recognize the Supreme Court is not the supreme being, and we change the policy to be prolife and protect children instead of rip up their body parts and sell them like they’re parts to a Buick.” (August 7, 2015)

Justin Barclay, host of the WOOD Radio program West Michigan Live, will be the emcee for the evening. Barclay has been heard in major markets all across the country, including Philadelphia, Detroit, Tampa, Cincinnati, and Louisville, and is a frequent guest host for the nationally syndicated Glenn Beck program.

Grand Rapids Right to Life president, Laura Alexandria, will give an update on the organization’s accomplishments in the past year.

Emily Ranschaert, Grand Rapids Right to Life contestant, will present her moving speech that propelled her to win the state oratory contest.

As we work together to protect the precious gift of human life, here are some simple ways that you can help Grand Rapids Right to Life make a difference in our community.

1.  For the culinary gifted, provide a meal for quarterly Support Services Luncheons.

4.  Forever stamps are useful for notes to donors and supporters.

5.  Quart and gallon sized ziploc bags are so handy.

7.  For promotional flyers, any color of card stock paper is great.

8.  A nice item to offer at expos and student events is candy.

10.  Bottled water or premium coffee can be shared with volunteers. 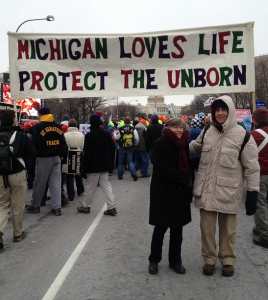 On January 22, 1973, the United States Supreme Court passed the Roe v. Wade and Doe v. Bolton decisions that legalized abortion-on-demand through all nine months of pregnancy in all fifty states.

The peaceful demonstration on this somber anniversary every year since 1973 is a witness to the truth concerning the greatest human rights violation of our time. The March for Life in Washington, DC, began as a small demonstration and rapidly grew into the largest prolife event in the world.

Grand Rapids Right to Life will be hosting bus trips to Washington, DC, for the 49th annual March for Life.