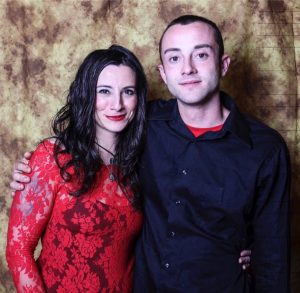 Aziza and Her Son

I had my son at 15 years old … just three weeks shy of my sixteenth birthday.

I found out when I was two months’ pregnant after taking several home pregnancy tests. My son’s dad and I discussed our options, and we were very determined to have our child.

Together with my mother, we visited Planned Parenthood to confirm my pregnancy. A nurse pulled me aside, away from my mother and my son’s dad, and told me I was being selfish for wanting my child. She said that because I had had a rubella shot a month or two prior to becoming pregnant, my child was going to be mentally retarded, handicapped, have missing arms and legs, and would probably die shortly after birth.

I will never forget the nurse who told me these horrific lies. I told her that it was not selfish to give life, that we had already made up our minds, and that she was not going to change our minds. She continued to tell me how selfish I was. She told me these lies over and over again insisting that I needed to have an abortion.

After I went to get my mother and my son’s dad, we told the nurse that we were going to talk to a specialist, which we did. He said that those things she had said were all lies.

My son was born a little after his due date on November 4, 1991. He weighed 9 pounds 2 ounces and was extremely healthy!

His dad and I did our best to raise him. Sure, college had to wait and hanging out with friends didn’t happen as often. I also had to work part-time and finish school through alternative education, but big deal! I don’t regret it for a day.

I would do it all again.

I learned to be an independent woman, and I gave my son the wings of independence. He is my baby forever, and every time I look at him I remember this story. He is a hardworking, handsome young man who loves life. The small sacrifices I made were worth it. I love being a mother. It is the greatest gift of all.

I am now a voice teacher, a classical and rock singer, and I run my own perfume and soap shop. My son pushed me to be a better human being and to live life to the fullest for both of us.