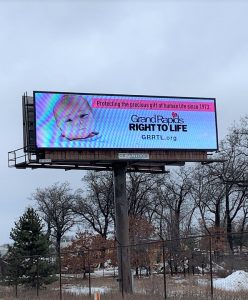 The billboard message stated that Grand Rapids Right to Life had been protecting the precious gift of human life for 47 years.

In 1973, the U.S. Supreme Court decisions of Roe v. Wade and Doe v. Bolton legalized abortion through all nine months of pregnancy, in all 50 states, for any reason. In 1972, before those landmark decisions were passed, prolife citizens in Grand Rapids created a loose-knit statewide coalition, Voice of the Unborn, to fight the abortion referendum. From that group, Grand Rapids Right to Life was formed and incorporated in 1976 as a non-partisan, non-sectarian, non-profit organization whose main goal was the constitutional protection of all human life in all stages of development.

The billboards included the Grand Rapids Right to Life website, where online visitors can learn more abortion, discover upcoming activities, sign-up to volunteer, and donate to the cause.

We’re taking a Coins for Kids baby bottle drive out of your hands and putting it in our parking lot! With churches, schools, and civic groups coping with the ever-changing restrictions that inhibit services, classrooms, ... Read More