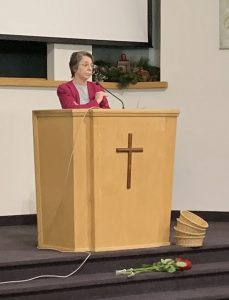 Keynote speaker Dr. Monica Miller spoke to the crowd of almost 150 people who were in attendance at Grandville Church of Christ.

Miller shared stories about her activism during the early years of the prolife movement. She focused on the humanity of the aborted child and how their death separated them from the human family, where they ought to be welcomed and loved. She admitted that once the horror of abortion is fully realized, no one’s life can ever be the same.

Sophia Imhoff, from Dance Dimensions, performed a lyrical dance to the song You Named Me No One, which ended with young people walking toward the altar in T-shirts that spelled S-O-M-E-O-N-E. Beautiful solo work was performed by Lizzy Visser, who sang Unplanned.

Laura Alexandria, president of Grand Rapids Right to Life, gave concrete examples of what 60 million really is, in terms of time, distance, and population. These illustrations were an effort to make the enormity of abortion comprehensible.

The opening reflection was given by Curt Zondervan, elder at Grandville Church of Christ. Grand Rapids Right to Life board member Joshua Volk closed the memorial in prayer.

Photos from the Memorial Service for the Unborn can be viewed on the Grand Rapids Right to Life Flickr page.

We’re taking a Coins for Kids baby bottle drive out of your hands and putting it in our parking lot! With churches, schools, and civic groups coping with the ever-changing restrictions that inhibit services, classrooms, ... Read More