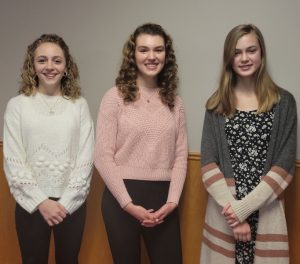 “If the world had never had stars, we wouldn’t even know what we were missing… To us the night sky would just be a sheet of black,” she explained. “That is exactly what is happening with abortion. God thought that the world needed these children. He made them especially, and each one would have been unique. Now we will never even know what we missed.”

Liliana Zylstra, a homeschooled senior, placed second and received a $150 scholarship. Her speech focused on the deadly discrimination of abortion.

“In modern America, as well as in many other countries, equality appears to be one of our highest goals. An obsession even. Anti-discrimination advocates can expect praise and popularity. Historically oppressed groups are listened to and supported,” she stated. “But many so-called champions of human rights stop short of recognizing the most oppressed and marginalized group in the world. Preborn human beings.”

Adeline Kaufman, a junior at Catholic Central High School, placed third and received a $100 scholarship. Her speech took an interesting look at a society that limits women by claiming that success is only possible if she aborts her children.

“A culture that truly empowered women would say that women could do so many incredible things with and because of their children. But instead, we have a society that tells women they must do these things at the expense of their children,” she admonished. “This lie is cruel. Our world tells women, ‘you can do anything,’ but then it turns around and whispers, ‘except the most beautiful thing your body was perfectly designed for.’”

All of the contestants were deeply passionate about the right to life, and each had a distinct viewpoint on the issue of abortion.

Emily Ranschaert will compete in the State High School Oratory Contest, which will be held May 22 in Charlotte.

Photos from the High School Oratory Contest can be viewed on the Grand Rapids Right to Life Flickr page. 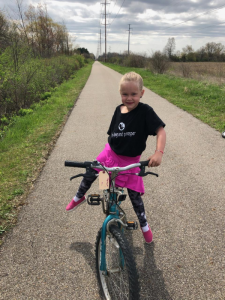