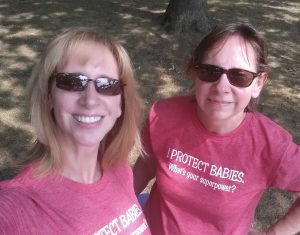 I am a firm believer in sharing the prolife message in simple ways … bumper stickers, checks, e-mail signature lines, and T-shirts. I am not, however, particularly comfortable in all situations wearing a prolife message emblazoned on my body.

When my sister called one evening, it was with much unease that I realized she wanted to decide which prolife T-shirt we would wear to the Ann Arbor Art Fair the next day. A prolife T-shirt was sure to make an impression in a liberal city, at an art fair, especially when we were both wearing the same one.

My sister’s boldness, mixed with a little naiveté, was both refreshing and distressing. Not wanting to disappoint her, we sported matching T-shirts at the fair, in restaurants, and in coffee shops.

Throughout the day we received derisive looks, which we deflected with a smile, and some vendors completely ignored us, which actually made us linger just a bit longer at their booths.

Overall the responses were more positive than negative, and some people were prompted to share with us their solidarity in the movement.

The day was a subtle reminder that I can withstand a few contemptuous looks in defense of the unborn, who suffer the ultimate pain and persecution when they are killed in the womb.

Prolife people are invited to the Annual Conference sponsored by Right to Life of Michigan. Be a part of this inspiring day filled with compelling information, inspiring speakers, and strategy sessions to promote a culture of ... Read More